42 is the name of an exhibition featuring photographs of women from Sierra Leone by British photographer Lee Karen Stow currently being exhibited at the Horniman Museum, South London.

The exhibition features women in a range of everyday settings but behind each image is a powerful and extraordinary story. 42 was originally exhibited in 2007, when Stow sought to document the brilliance and resilience of women from this previously war torn nation.

Having recovered from a civil war, the Ebola virus and now flooding, Sierra Leone (which means Lion Mountain in Portuguese), is unsurprisingly one of the poorest countries in the world but ironically one of the richest countries in terms of its natural resources. A decision to re-exhibit the collection, could not have come at a more opportune moment, serving as a reminder of the incredible strength and courage of Sierra Leonean people.

The exhibition features a broad spectrum of Sierra Leonian womanhood all within their ‘natural’ habitat: women boxers in action, fashion models striking a pose, agricultural workers tilling the land, faith filled women crying out to God, mothers and children in a variety of settings, nurses caring for those in need, brigadiers exuding power and disrupting traditionally masculine spheres, human rights activists -dignified, powerful and poised- the list is endless. It also managed to feature the First Lady of Sierra Leone – Sia Nyama Koroma.

At first glance, these seem like pretty ordinary images, but what Stow has done is to cleverly encapsulate an extraordinary breadth of women related issues, anchored by the accompanying blurbs. High infant mortality and maternal deaths rates, Female Genital Mutilation, girls education and gender equality, single parent households, women in work, women operating in traditionally male fields (I.e. boxing and the Army),faith as an anchor in everyday life, women pursuing their dreams despite the adversity – all of this and more is brought to life in 42. The photos also subtly promote some of the initiatives providing innovative solutions to these issues whilst also building solidarity and empowering the women.

Strength, perseverance, character, beauty and determination permeate these beautifully vivid and bold images of Sierra Leonean women. What gives this exhibition added poignancy is that a few of the subjects, are now deceased including one of the children photographed as a result of poor health care. Despite some of the grim subject matters covered, 42’s dominant narrative is hope.

The only criticism I have is of the location of 42 within the museum. Even though it is ideally placed on the upper floor (along the main balcony area of the museum) the area is dimly lit and in my view, limits the viewer’s experience. Similarly the exhibition is broken up by the museum’s permanent Romanian heritage collection which is slightly disorientating and disruptive.

42 is running until Sept 27th at the Hornimans Museum in Forest Hill, South London. The exhibition is free. 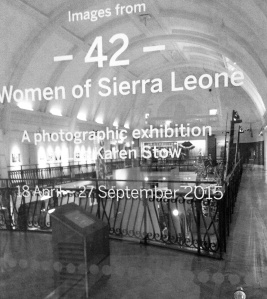