I work in one of the trendiest areas in London bursting full of cultural and creative delights- but rarely do I take advantage of this and explore what’s on offer. However, a few weeks ago I decided to visit Black Chronicles II, a new exhibition exploring the presence of Black and Asian people in early 19th and 20th century Britain, by Autograph ABP at Rivington Place, Shoreditch. I am a huge history buff with a keen interest in the Victorian era and the  Black Minority Ethnic (BME) experience so this exhibition was right up my street.

What I really liked about Black Chronicles II was the use of multimedia to depict the various unseen, marginalised histories of people of BME backgrounds in Victorian England.  This included a short film narrated by one of the curators, featuring some of the photographs on display. Similarly, the script from the film was also written high up on the walls creating a multidimensional feel and a sense of literal immersion.

It was particularly refreshing to see the breadth of the ‘Black’ presence (I know ‘Black’ is a potentially problematic term in this context but will use it anyway) extend to the South Asian community- giving the exhibition, yet again, another dimension. Below is one such example; a wonderful portrait of Major Mussa Bhai, of the Salvation Army taken in 1890:

The exhibition really brought forth the humanity of its subjects with each portrait being ‘allowed’ to tell its own story as far as possible. Often times Black history can be seen through a narrow, selective, colonial lens but I really felt as though I was beginning to witness the true diversity of the Black experience in Victorian England; in fact many of the photographs in the exhibition have been previously unseen by the public.

Another personal favourite were the individual portraits of members from the African Choir. Beautiful faces of all different hues, shapes and features- full of character, etched with unspoken experiences and accompanied with their full names. I can’t tell you how important it was for me to see the members awarded the dignity of having their own names written alongside their portraits- not nameless entities but marked by their own identities. Below is a portrait of one of the choir members, Eleanor Xiniwe. 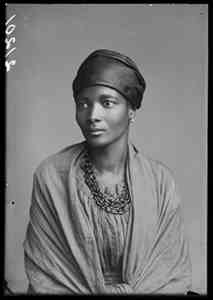 There has been a real resurgence in the popularity of Black Victoriana in recent months. Earlier this year the movie Belle was released (which is from a slightly earlier period) and a recent BBC documentary on Sally Bonetta Forbes,  described as the Black godchild of Queen Victoria reflect the growing interest for content that begins to uncover this rich body of history. 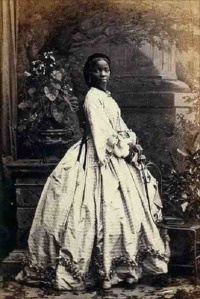 At this point I should declare that I have a vested interest in these exhibitions because my great, great grandmother – Sally Bonetta Forbes often features in them. Beyond her royal connections, she was renowned for her musical talent, intelligence and beauty but unfortunately met an early death due to consumption at the age of 37. And as expected, a small photograph of her and her husband were included in the exhibition.

As an Afropolitan, born in the West but roots firmly in Africa, Black Chronicles II  filled me with a sense of pride that I was partaking in a shared history of those who have gone before me in this same tradition. The exhibition is by no means perfect; there are still some images that wreak of colonialism and make for uncomfortable viewing; this is unfortunately part of the Black British historic experience. However it comes close to to something that begins to reveal the truth of the varied Black presence in Victorian England.

Black Chronicles II is a must see for anyone interested in the diverse, hidden histories of BME communities in the UK.

The exhibition is free and runs until THIS Saturday 29th November.